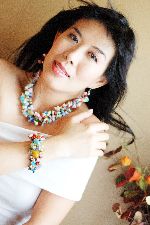 Commercial model Kirsten is a long time official endorser of renowned shoe brand Durante Perrie, the owner of whom consider's Kirsten's feet a "lucky charm" for through the years, her endorsements always raked in overwhelming results. She is a fashion designer and likewise models the gowns designed by Bridal Couturier and Filipino Fashion Designers. She was featured at VIP magazine, Basta Pinoy News, Bride Magazine and was cited as one of the most beautiful women of Negros by Island Living Magazine.

> During her term as President of ALMS, Kirsten and her team won
“Grand Slam “ in Community Service, Child and Youth Welfare Activities,
Nutrition, Dog tag and Blood Typing, Waste Management and Recycling
Activities, and Participation to Local Component Medical Society.

Bravo Kirsten. You did it again. It happens time & again because you always put your heart into it. MABUHAY! Long live to a very dedicated model/designer, modern yet with a touch of nostalgia. Congratulations Gil Purcil - excellent captures, vivid colors, beautiful compositions!