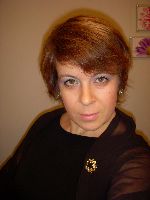 Unlock potential of your home with Sense of Design

I am a certified, professional stager and redesigner who works with Realtors and homeowners by enhancing the appearance of their home so it appeals to a broader range of potential home buyers. I strive to help my clients receive the best possible price for their listing – quickly!
Interior design is my passion. I've done about 25 renovations and successfully flipped 4 properties with a total profit over 200 000 dollars.
I'm an artist. I do painting on silk and in last 4 years I had 2 personal exhibitions and my collections were shown on central TV in Russia.

You never get a second chance to make a first impression.
With this in mind, Sense of Design was founded in Edmonton to help homeowners and real estate practitioners prepare homes for effective showing and quick selling at top dollar.

Staging is the process of preparing a house for sale. This can involve a thorough procedure of cleaning, de-cluttering, rearranging and updating the house and its décor. Home Staging is the most effective marketing tool you can use to SELL your home quicker for top dollar. In today’s market, it’s more important than ever to make your home stand out from the crowd.

* Creates that all important first impression!
* Is more appealing to buyers because they’re seen as being “move-in” ready.
* Appears better in photographs and internet marketing.
* Sends the message that the home won’t be on the market for long!
* Receives the best possible price quicker than a house that isn't staged!

Sense of Design pay attention to detail and provide full-services from painting and minor repairs, furniture layout and artwork to landscaping, whatever it takes to set the stage and get a property looking great with mass appeal.

Because the real estate marketplace is so competitive, it is important for homeowners to differentiate their properties. This increases the perceived value of the home and encourages higher offers. Sense of Design helps make this process as simple as possible.

Interior Redesign is the latest fad in preparing your house for sale or to just give your home a new look without a lot of costs involved.
Redesign means:
Making the most of what a home already has. Most homes have the foundation for a good design it just needs that special touch to bring it to it’s full potential.

Redesign is affordable. There are plenty of practical and inexpensive options available when it comes to improving the looks and feel of a room. For example, by simply rearranging the furniture, a small space suddenly appears much larger.

Redesign is about creativity and resourcefulness. The type of furniture or accessories in a home is not as important as how and where you choose to place them. Redesign presents innovative solutions to common problems that allow people to make significant changes to their homes without taking drastic measures.

How does it work?
Sense of Design will Redesign your home, using your existing furniture and accessories, we incorporate the principals of interior design - function, balance, proportion, scale, harmony and your lifestyle to create the home of your dreams. The service is designed to work within your budget. There usually is no need to purchase additional pieces; you have everything you need.

It's a huge investment in material and labor and it must be timeless at least for 7-10 years. The goal is to improve house and raise its value. To make it right you will need a design concept and choose right materials. With Sense of Design you will achieve your goals and will enjoy a new look of your home. We will provide a contractor whose work has exceptional quality.